The new Global XRS 7400 series with three axles is the foundation for this. As is customary with vehicles, the vehicle features all-wheel drive and is built for off-road usage. Up to 2 litres of fuel savings are achieved by increasing the horsepower to 630 hp. Traction and safety are enhanced with differential locks on all axles and longitudinal compensating waves. Automatic temperature control, heated, ventilated leather seats and other features make lengthy highway segments a breeze.

We’ll be travelling to Austria in one of the outstanding long-distance automobiles from the Loosen series. Skiers and other mountain enthusiasts flock to the Salzburg region near Saalfelden. However, the company started its business in 1979. The firm began a steep career in the global travel scene, first with trailers for off-road vehicles and pickups and then with housing modules on all-wheel-drive trucks.

The new Global XRS 7400 is a powerful, compact, and versatile machine designed for the most demanding people. Today, cars are more elegant and convenient to drive than the initial versions based on military vehicles over 40 years ago. Modern all-wheel-drive truck models are based on high-volume technology from Mercedes and M.A.N.

XRS 7400 is the latest addition to the Global X.R.S. family

The new Global XRS 7400 project is also based on M.A.N. The chassis is a three-axle MAN TGS with all-wheel drive, lockable differentials, and a 630-horsepower engine. While previous military variants required extreme austerity, the long-distance driving cab is more pleasant and has air-conditioning and leather seats. With action mobil, you’ll be able to discover your beach camping in no time.

The new Global XRS 7400 on both rear axles is a unique feature that provides several benefits. As a result, driving through tight turns is made more accessible by using the third axle. It is also possible to level the car in rough parking places because of separate management of the air springs. The vehicle’s living quarters are reached through an electronically fold-out stairway, which provides considerable mobility, given the vehicle’s proportions.

There are four sections to the 7.4-meter-long box separated by a divider. With a tiny stairway in the back, you can get to the half-open double bed with a small stairway in the back. In front of it is the kitchen block, which has a counter-height bench for two people. The couch in the living room provides a place to sit back and relax.

Details on the Specifications

Like traditional R.V.s with basic amenities, the new Global XRS 7400 sanitary compartment is positioned near the driver’s seat. Because of the cabin’s breadth, the shower has a glass door, and the basins and toilet each have their room. It has developed a shower wastewater treatment system that filters, sterilizes, and recycles the water to ensure long-term self-sufficiency even in remote locations.

There is a mechanism known as a shower loop. It is also possible to routinely drain the grey water into the wastewater tank. There are a lot of leeways when it comes to the water supply. The M.A.N. The new Global XRS 7400 can contain 620 litres of fresh water, 140 litres of greywater, and 80 litres of holding water.

Disposal stations include remote controls that simplify emptying the vehicle’s wastewater tanks. When the beach becomes too crowded, you go to the mountains. With the Arctic package, northerners will have a great time on their vacation. There is also underfloor heating in the body, heated diesel tanks, batteries, fuel lines, and a heater for the engine block.

Environmental regulations also apply to electricity. The solar panels, with a total of a phenomenal 1.7 kW maximum output, are not just set flat on the cabin roof but can be tilted and adequately aligned with the sun. It has a significant impact on the amount of solar electricity generated. Power generated by solar panels is stored in four battery modules with a combined capacity of 800 Ah. With the new Global XRS 7400 in summer, theatrical self-sufficiency extends to heating the bathroom and kitchen with electric hot water.

The body batteries are supported by a charger for shore power if necessary. The driving engine kicks up when it starts raining a long distance away. They claim that it can charge the batteries for a day’s worth of use in as little as 30-45 minutes, thanks to the device’s advanced charging technology. It’s not surprising that the onboard technology didn’t make any savings in the kitchen, given this excellent power capacity for R.V. fans.

In the new Global XRS 7400, a Miele induction hob with four cooking zones and a microwave oven and washer-dryer with a total of 7 kilograms is chosen for the kitchen. However, it has developed its cooling mechanism in-house. There are 175 litres (refrigerator) and 150 litres (cooler) of storage space inside the very tightly sealed modules (freezer). As a result of the two inverters, the onboard technology draws a maximum of 7 kW of electricity.

Naturally, the new Global XRS 7400 exterior has several eye-catching elements. The motorbike lift, lowered to the ground for loading and has a load capacity of 500 kilos, is the most prominent feature. The dinghy is secured at a two-meter elevation during transit, making it impervious to theft. An automatic satellite television receiving system is installed on the cab’s roof and automatically seeks the most appropriate signals.

There are air inflation pipes on the side of the cab to bring the tires back to normal pressure after driving through thick sand or off-road. The rear road underrun protection folded open and impacted the approach angle. It is a valuable feature.

Interior of the New Global XRS 7400

Visitors are drawn to the couch’s lounge persona on entering the living room. An additional sitting space and dining table are provided for more than two persons travelling. There’s room for refreshments in the kitchen’s separate seating area with only two employees. Cooking is done using the most up-to-date M.I.E.L.E. equipment. Four cooking zones, a booster function, and pre-boiling options are integrated into the granite countertop’s induction burner.

With a microwave and unique cooking programs, an oven completes the kitchen. The new Global XRS 7400 kitchen room also has a new 7 kg capacity M.I.E.L.E. washer-dryer. In addition to the kitchen, there is a 175-litre  refrigerator. Insulation levels of 60mm P.U. and low energy usage make this product an excellent choice.

Only a chest freezer with a capacity of 150 litres has better insulation: In addition, the 90 mm thick walls here enable effective use of energy. Directly outside the compressors, the heated exhaust air is drained of its heat and humidity.

When discussing energy efficiency, it has focused on the cautious use of our natural resources for decades. A battery pack with an output of 22,000 Wh and an optional capacity of 800 (or 1,400) Ah is the culmination of current work, including roof-mounted, tiltable high-performance solar panels.

The new Global XRS 7400 have four installed batteries which are all self-sufficient. It implies that the power source will remain intact even if up to three of the four batteries fail. Electricity generated at 230V is both quiet and redundant. A total of two 3,500-watt inverters are at your disposal. We use Matterport equipment for all our energy-generating and storage needs. 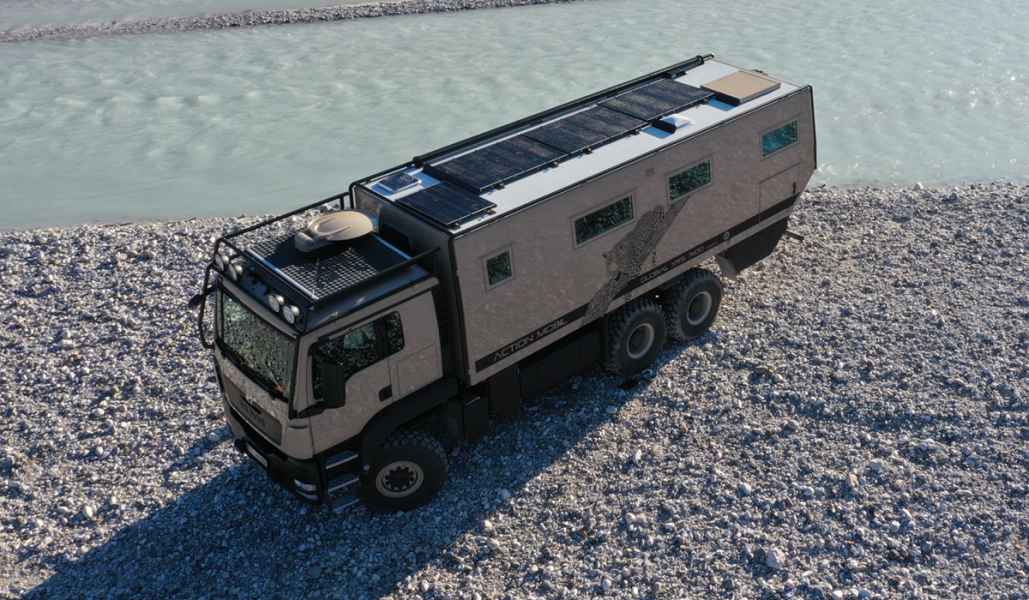 The new Global XRS 7400 is no exception. One expects an investment of 845,000 USD if the vehicle is equipped with “high equipment,” while the one shown in this article and the accompanying photo gallery purchased for 986,000 USD. These are net prices in this range, including the applicable taxes in the destination country, as is customary in this range.